Finding the best title for a book has always been a bit of a puzzle and most book authors I know have stories to tell about how their books were ultimately christened. So how do you come up with three or four words that somehow encapsulate what took some 70,000 to expound in the first place?

One of the first surprises I learned is that the title you begin with is often not the title that that winds up being published. There is the “working title” and then the final title that appears on the book cover. For example, the working title of A Tender Distance was originally This Caribou Season. I chose it because that Alaska fall hunt was an important ritual of my sons’ growing-up years. This was a memoir about their childhood and their “migration” from boyhood to men. To me it seemed perfect. But the editor, Sarah Juday at Alaska Northwest Books, suggested that I reconsider. The book wasn’t really about hunting and the title didn’t convey anything about my sons or our relationships.
It took months of scribbling on the backs of napkins, dozens of conversations with writer friends, and finally, a mentor friend, Richard Goodman, from Spalding University’s MFA in Writing read the book and said, “This is not a book about your sons. It is a book about you.”
My Lutheran, Lake Wobegon sensibilities chafed a little at any notion that I was trying to call attention to myself.  This was about my children, not me … but deep down I knew Richard was right.  The book was a memoi 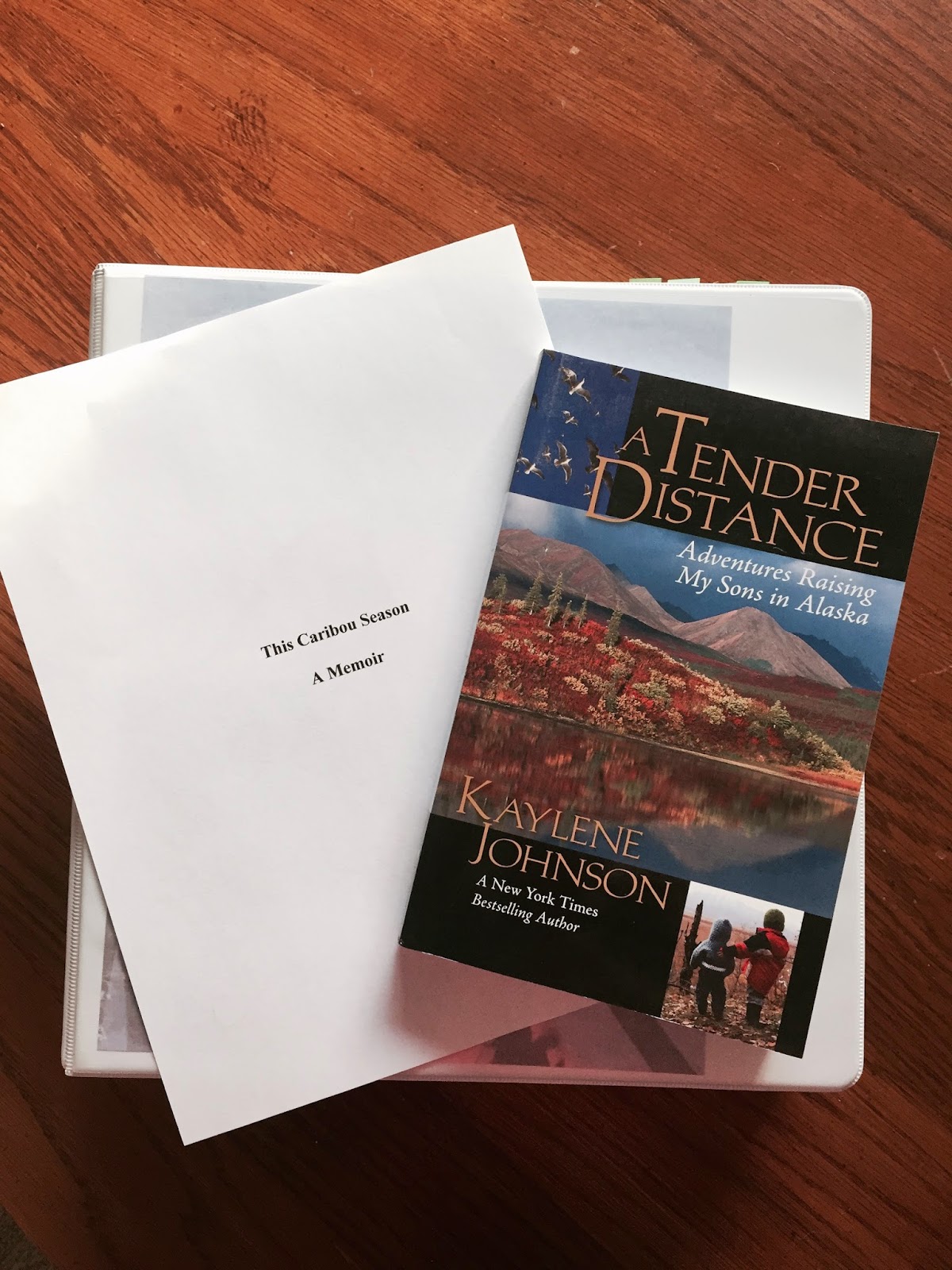 r about motherhood. And then one evening, in that luminal space between sleep and wakefulness, the words “tender distance” perched in my thoughts. There it was. Those were the words that best conveyed that tension between a mother and her sons as they left their childhoods behind.

Sarah subsequently helped write a subtitle with “searchable” words for readers looking for a particular kind of book. Adventure. Sons. Alaska. The full title of the book grew into:
A Tender Distance: Adventures Raising My Sons in Alaska

I went through a similar exercise recently with my forthcoming book (Spring 2016) from the University of Alaska Press. This is a biography of Ray and Barbara Bane whose conservation work in Alaska helped draw the lines on the map of Alaska’s treasured public lands. The working title of the book was Gathering Echoes: The Life and Times of Ray and Barbara Bane. Ray and I talked at length about this title.  It embraced his desire to collect the stories and preserve the old ways of the Native elders whose relationship with the land was reverent and resourceful.

Again the editor, James Engelhardt at University of Alaska Press, asked us to reconsider. While the working title honored Native elders, it drew no attention to the stories of Ray and Barbara as a team or the formidable fight they undertook to save wild places in Alaska.

This time I was stumped. Ray and I came up with dozens of possibilities, narrowed them down to two or three and submitted them—only to hear that they still weren’t quite right.  James suggested an exercise: Take some phrases in the book that reflect some of the book’s themes and see if they work; if not, mix them up and see what happens. Here was the list James offered to play with:

A Boy’s Dream, A Man’s Soul
A World Apart
From West Virginia to Arctic Plain
And A Heated Debate Ensued
The Fate of the Wild North
Furthest/Farthest North Park Ranger
A Place Remote and Sacred
Just Add Another Million Acres
I Hate Your Guts
The Feds Can Go To Hell
To Save the Frontier
Last Chance To Do Things Right the First Time
Caretaker
It Had Been Perfect
Ray, You Got Problems
Citizens of the Natural World
To Thank the Land

Our Perfect Wild:
Ray and Barbara Bane’s Journeys in the Fate of the Far North

The word “Our” holds the concept of Ray and Barbara as a couple; “Perfect” conveys an Eden quality (with the potential of a fall); and “Wild” reflects all that they cherished and tried to preserve.

It was an interesting exercise and I will use it again when the time comes to name a book. As in all revision, the exercise begins with a certain level of letting go—especially when the working title seemed ideal. But as often happens, writing will take on a life of its own and surprise you.